Can You Trust Yourself in the Midst of Change? 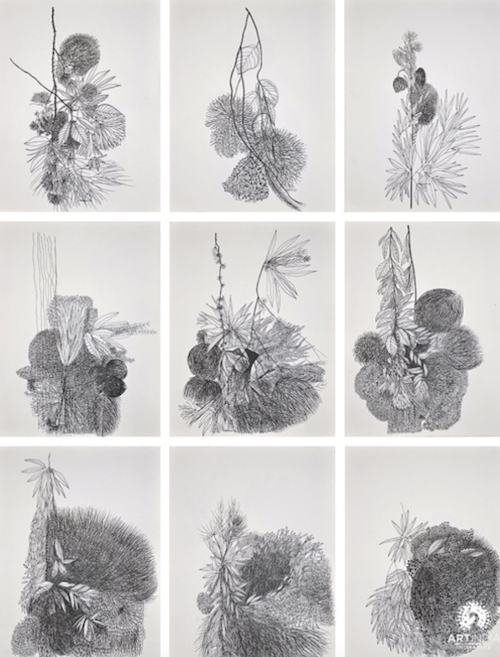 I left the world of finance and academia and entered the woo-woo world of flower essences. This was an abrupt and dramatic shift.  I felt like an outcast on both sides of the great divide. Stripped of a title, without a clearly defined job, I struggled to explain what flower essences were, or how I was using them. “Aromatherapy?”  my friends would ask, struggling to understand. “No! Flower essences are different,” I would say, and then fail to explain clearly what it was I meant or how this applied to what I did now.

I hid the flowers from the world.  I hid what I did from my old friends, my mentors and all those who had known me. When people asked me what I was doing, I said “nothing.” I put on weight and didn’t feel comfortable in my own skin. But deep down I could see my world was shifting in ways I couldn’t describe. Then Kishore came along.

Kishore is a lot younger than me. I had been born and raised on the axis of colonialism that started in Calcutta, (now called Kolkata) and ran through Delhi, Cambridge, England and Boston. I was a child of that axis, with its mantle of “should’s and must’s.” Kishore was born a generation later, in an interior village of India—a breakaway state that wanted its independence from another state, Madhya Pradesh. He went to Asia’s first school for the visual and performing arts, close to his village, and chose to be an artist. He was the only son in a family of girls. 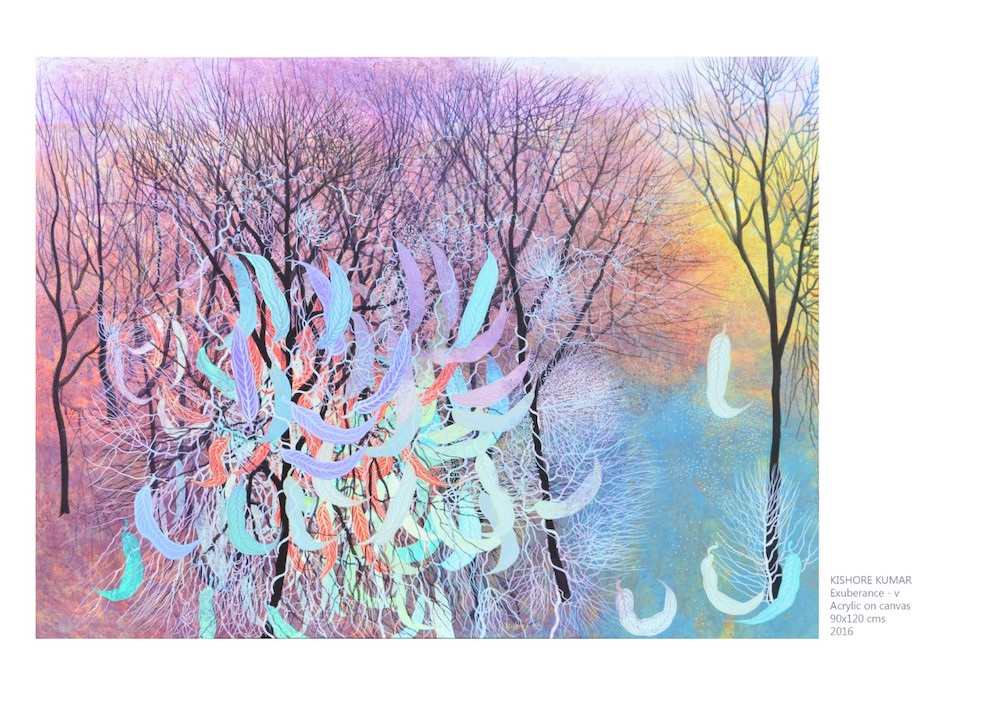 “What did your parents say about you becoming an artist?” I asked. “They were very supportive,” he told me, which was surprising for an only son. I had thought they would have expected very different things from him. “They have always encouraged me to do what I want,” he explained simply. Had India changed so much in the time I had been away or did he just get lucky? Perhaps life wasn’t any better on the axis of power and progress than it was in a small interior province, struggling to differentiate itself. I looked at his work—there was a freedom of creativity and expression that seemed to belie his small-town roots. His work was universal, global in scope. It could have been born anywhere.

I helped Kishore with his brochure. I helped him with the installation of his art at the exhibition in India from my new home in Boston. I learned where to hang the big pieces, where to hang the other pieces so they could be seen, and not become overwhelmed by the scale of his other work. I did all of this without even being there, without seeing the actual objects in the space. Kishore kept asking me for advice and I kept telling him that I wasn’t an art expert, that I was out of my league, but he didn’t seem to notice. His English wasn’t great, and my Hindi was a little awkward. When I was young, my parents had mostly conversed with each other in English because they were from two different parts of India. English was, oddly enough, then the only common language between them.

As a result, I always felt a little unsure of myself when I spoke in Hindi to someone for whom it was their first language. In the missionary school run by Irish nuns where I had studied, Hindi was taught as a second language–maybe I would make grammatical mistakes. Maybe I would say the wrong thing. Maybe I already had. Despite it all, Kishore put his trust in me and I felt obliged to rise to the occasion.

There is a point at which we are called to let go of the pretenses that might have served us well in the past, but which don’t serve our soul in the present. If we don’t choose to let go, to turn toward our essence and away from distractions, circumstances may force the issue. In the process, we are stripped of a resume of accomplishments and left to stand alone.

It’s uncomfortable at first, to be alone, with only our essential selves. After all, who are we without the titles, the credits, the degrees and job descriptions? The network of relationships and social connections? When the certainties that anchor us to the world around us disappear, then what? When we make an abrupt shift, the fabric that supported us is torn. The certainty of the rhythm of our days and the well-laid out paths we follow that give us the illusion of belonging, disappear into the mist. Who are we then, when those are all gone? This is the gateway to grace, to understanding who you are–to honoring your essence.

Blended Flower Essence Therapy for Finding the path to yourself 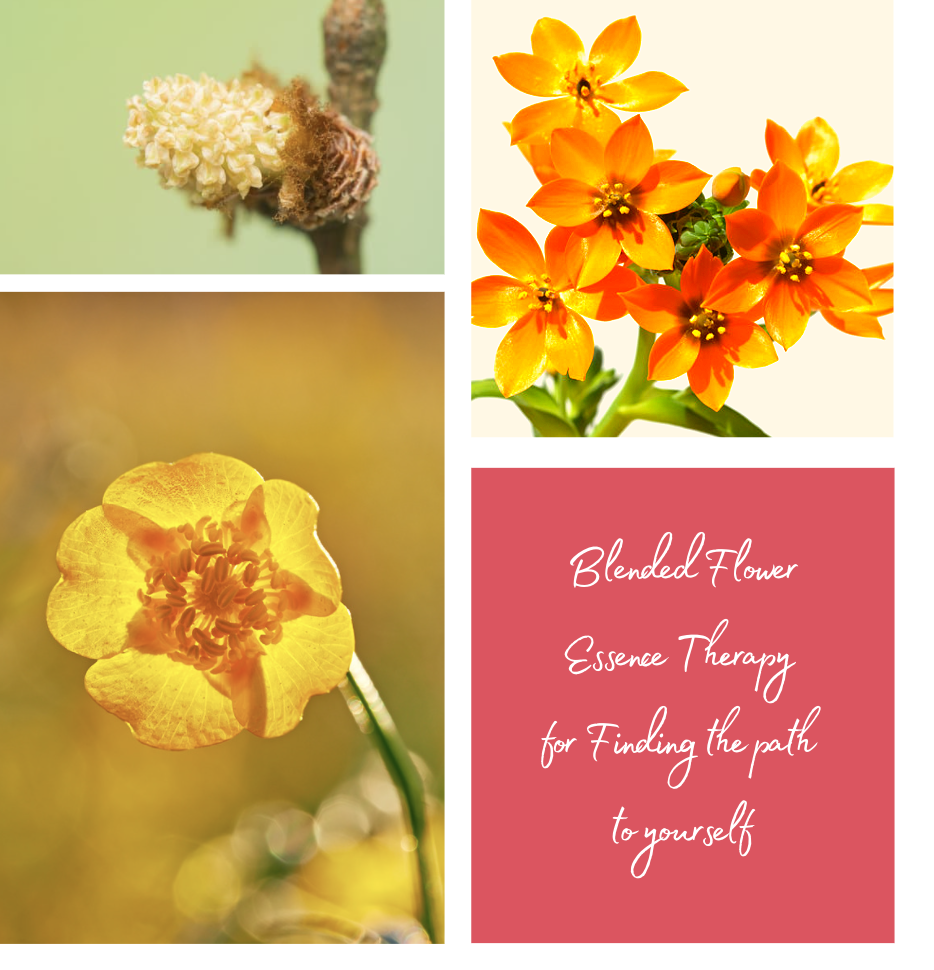 Mother Teresa once said, “Not all of us can do great things. But we can do small things with great love.” That, I learned is the essence of Buttercup, a small and humble yellow flower that hides great power. Buttercup allows you to believe in your light and shine it outward into the world, without wondering if it’s bright enough or big enough. Your soul gathers the strength to live according to its own code, to rise to the occasion, and move beyond the standards of success and the limitations imposed by the world.

I often combine Buttercup with Larch, the flower essence that frees you from self-doubt, self-censure and the small voice that says you can’t do it. Larch allows you to believe in yourself. With these two together you can unlock that part of you—your essence–with confidence.

The six-pointed Star of Bethlehem releases the trauma and grief of the past so that you start to move forward. It soothes and provide a sense of comfort and is one of the most important remedies in the flower essence repertoire, bringing balance and calm when you are caught up in the swirling white water of trauma in the past, or in the present.

This is the fifth blog in a weekly series that explores my search for reverence for life. What does it mean and why is it important?